Pajama Party: A way to entertain kids during summer holidays

Arushi's (my 4 year old gal) summer holidays are over and she is back to school. Phew!!!
It was damn difficult to keep her occupied (she has started to say "I am bored"). Idiot box is her treasure box and she is at it at every given chance.
I tried to be a responsible mother(?!) for a change and put my 'entrepreneur' stuff at back burner. Here are the things we did this summer:

1) Went swimming loads of times (taught her breathing in water)
2) Took her to our condo's play area regularly.
3) Went to Science center
4) Went to Snow City
5) Went to couple of Indoor playgrounds (She is crazy about them)
6) Setup play-dates with her friends
7) Covered obscure parks (I had wanted to see them for a long time)
8) Made weekly trips to library. 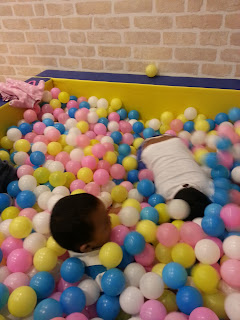 But the 'Pajama Party' was the highlight of all the things we did together.

The forest fire in neighboring Indonesia spew Haze like Hell in Singapore and all of us were stuck indoors. Imagine the plight of mothers when kids could not set foot out with Summer holidays in full swing!

So, I thought about organizing an indoor playtime for kids. Haze by then was down from being 'hazardous' and kids could now hop out for transit (but staying outdoors was no! no!)

Arushi and me came to know about the concept of pajama party from one of the library picture books.
"Sleepover" is a culturally alien concept among us Indians. So our 'Pajama Party' was just another party where everyone came dressed in a Pajamas (I take a bow!! bow!!thanks for the brickbats :))

Arushi was involved at every stage of planning and I could go to the extent of saying that we organized it together.

In case somebody wants to know how we planned it:

I was working on a budget of $50. Arushi drew up her invitee list of 12 kids (her classmates, my friend's kids and her neighborhood friends). Cleaning the house post party with 10+ kids was terrifying and so I spent precious $20 on booking the community hall in our condo. Anyways I guessed right that kids would love to run around.

We drew-up a menu:
1) Microwaveable popcorns (we had 3 bags at home - Nearly half of it was leftover after party)
2) Farmland Frozen French fries 2nos  (around $7)
3) Fairprice Potato Chips ($ 6)
4) Coke, Minute maid ($8) for adults
5) Individual carton Marigold apple juice for kids ($7)
6) Cupcakes (All ingredients were available at home - I am always bake-ready, but bake rarely)

On the day of Party, we started baking early. It was my first attempt at Tutty-Fruity cup cake, so we did a trial first and then made the actual batch. Arushi then frosted the cake and decorated it with 'Hundreds and thousands'. 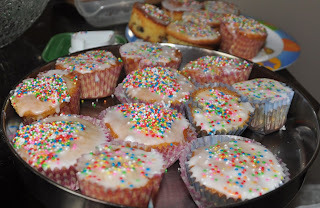 Pajama party then started with me reading aloud the story book ' Mala's silver anklets' by Tulika books. It is a story about a little girl who loves to scare everyone. That was followed by playing "Making scary noises" game.

We then played "Musical statues" where everyone has to dance to music. When the music is stopped everyone should freeze in whatever poses they were dancing. The 4 year olds were never into the concept of getting 'out' so I let someone continue the game even if they were a shaky statue.

The children were fully hyped up by then. We then played a game of sleeping lions. I had couple of bedspreads with me and the kids lay down on them. The idea is that everyone pretends that they are sleeping and my job was to try to wake them up. I dint do a great job on purpose. Other mommies needed time to fill up plates with food and serve them with no one running around!

I read them few good books while they were eating - "The tiger who came to tea", "The very hungry caterpillar" and  "Good Night, Gorilla"...

We then played a game of Simon says. I looked at this video for some tips on conducting 'Simon says' http://www.youtube.com/watch?v=RewIoHJ9RdM

The children came up with an impromptu game of dragon dance. It was loads of fun. 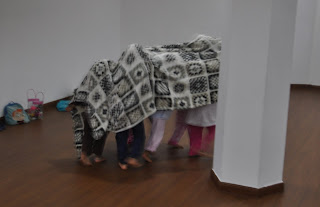 The school was reopening soon and we read the last story of the party - "I Love My School". This is a story of how a kitten overcome his hesitancy to go to school and starts loving school. It is written and published by me. Check out www.celebrationz.biz. I loved organizing this non-birthday party, please do leave comments with suggestions & ideas for my next holiday party! 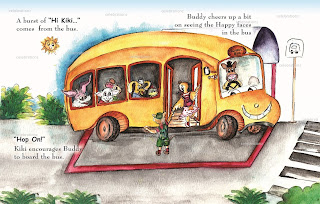